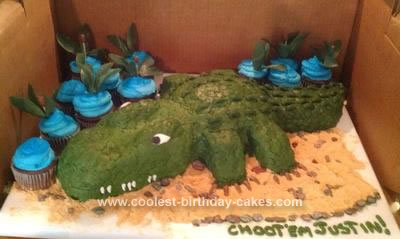 I was asked to make a Alligator Swamp People Cake for a friend’s son who was turning 10. He wanted chocolate so I opted for a heavy fudge chocolate cake recipe as I knew I would need to do a lot of sculpting. I also froze the cake prior to sculpting it to further prevent it from falling apart.

Part of the cake I made in a 9″x13″ pan; this I used to cut out the feet and tail. The body was baked in a medium glass dish to get the right shape. The head I used an oval corning ware dish with a rounded bottom. I used icing to build up the ridges on the face. The scales are simple varying shapes of icing piped onto the cake in dots then pressed down when slightly dried.

Teeth, scales and eyes were piped with icing, claws were Tootsie rolls shaped into claws and then pressed into cake. Sand was Grahame cracker crumbs, stones were special stone shaped candy. Cupcakes were made with white icing then sprayed with edible blue Wilton spray. Cattails were Tootsie rolls shaped onto toothpicks. Leaves were the only non edible item on cupcakes.