I promised this Homemade Angry Birds Cake months ahead of time, and ultimately had to throw a dinner party to show it off. I used chocolate cake, and chocolate frosting, cut into random wedge shapes and frosted in a messy fashion on purpose.

For the base I just frosted the cake board with white, and used a putty knife to make peaks, and sprayed green with edible food spray. I hand shaped all the birds and pigs in stages. The birds and pigs are 100% fondant. Body, snouts and beaks, eyes, and then finer details.

I used uncooked spaghetti noodles and a dab of water to hold on the snouts, beaks, and pieces on the heads. The dab of water by itself was enough to hold the eyes and other pieces on.

For the structure I used a variety of brown cookies and treats like fudge sticks and peanut butter sticks. The blue blocks are white fondant cut into desired squares, rectangles and triangles. I used a small paint brush with pure blue food color in a thin line around all the edges of the blocks, the a brush with just water to get the light blue color. For the brown blocks, I did the same, with black food color. The figures are holding up nicely in plastic bags, in a box.

The cake was a huge hit! All my fiance’s fellow angry bird loving friends were wishing it were their birthday.

*note to self* Mission accomplished! 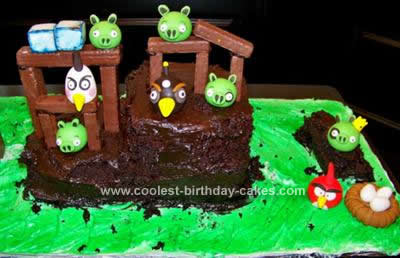 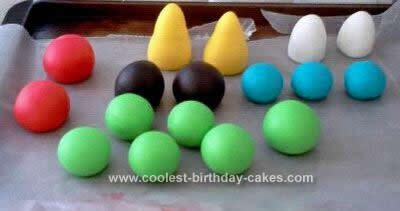 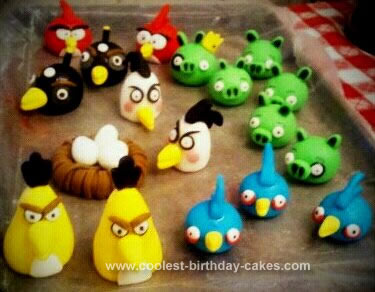