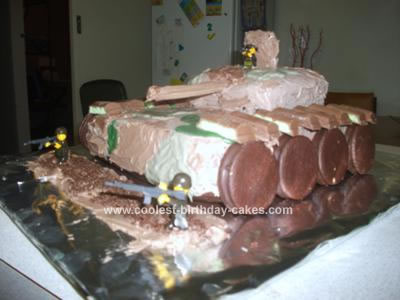 My son Jacob was having an army themed campout for his birthday and wanted a homemade army tank cake.

I baked a chocolate slab cake, and cut about 8cm wide off the end to use for the top. I then cut that in half and joined them together with icing and stuck it on top towards the back. I then made a base colour to cover the whole cake. Then made a few different greens and browns to do the camo spots.

I used mini wagon wheels for the wheels and Oreo bars for the tracks, I mixed them up and used the chocolate and mint Oreo bars. I used a musk stick covered in icing for the barrel. For the hatch door on top I used a piece of cake covered in icing. I cut a hole to put the cake in.

I used little army Lego men to put in and around the homemade army tank cake. The mud at the front is just icing with sprinkles.