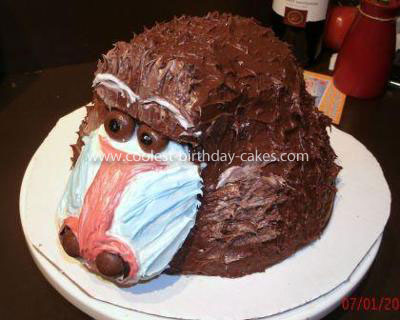 My 10-year-old wanted a Baboon Birthday Cake so I had to get inventive. The batter was two butter recipe cake mixes and the head was baked in three pieces using a 2 ½ quart glass bowl, a 2-cup oven-proof cereal bowl, and a mini loaf pan.

To make the head, I inverted and leveled the bottom of the cake baked in the largest bowl, and then sliced it in half to make it a layer cake. I filled it with approximately ½ can of chocolate frosting and iced the outside. I put the smaller dome-shaped cake on top of it and iced it, too, smoothing the sides to look like a single cake. I sliced the cake baked in the loaf pan in half because it was too thick, and then cut approximately a third of the length off to use as the brow ridge. The remaining two thirds created the muzzle.

The muzzle was slightly shaped to fit the angle of the cake. I attached it with toothpicks at the top, and then ran two bamboo skewers underneath it and through the cake for it to rest on. The brow ridge is also resting on bamboo skewers and attached with toothpicks. The brow ridge was frosted with the chocolate and the nose with vanilla. I tinted vanilla frosting red and blue with coloring paste with a little black added to tone down the shade. I painted the red and blue details on with an off-set spatula. The eyes and nostrils are sugar daddies, but I think junior mints would work, too. 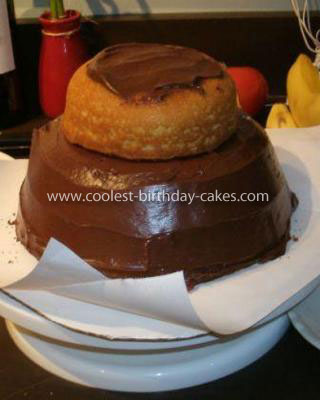 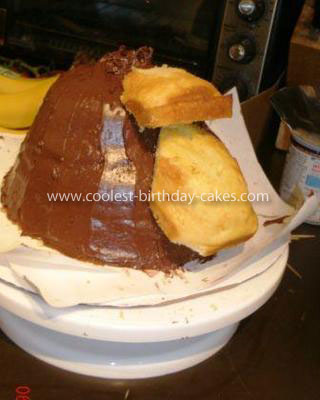 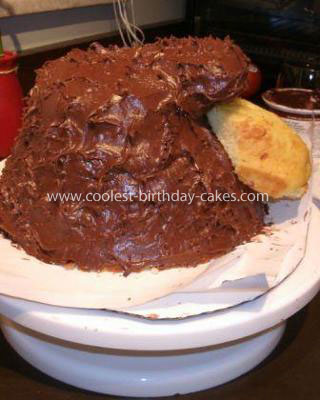