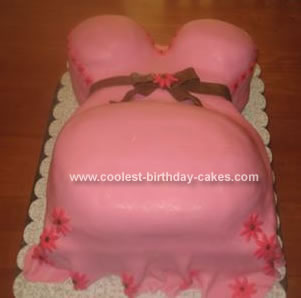 The two bottom half sheet were filled with strawberry mousse. I then frosted the two layered half sheets and then put in the dowels to support the bellie and the boob cakes. Once I put on the bellie and boobs I then put on a crumb layer.

The cake was a great hit at the baby shower.