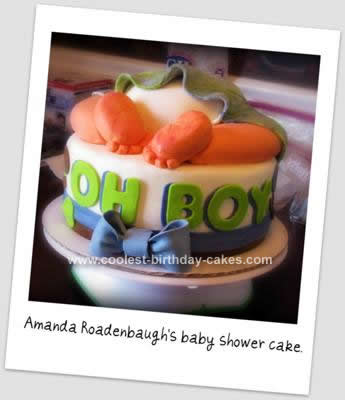 I am new to making fondant cakes. This Homemade Baby Cake was only my second cake. To prepare I first made the legs and the feet out of fondant. I also added a little bit of pink dust to the bottom of the feet to give them a more realistic affect. I did this step three days before the assembly of the cake so that they could dry into their form.

Secondly to prepare I made brown, blue, and bright green fondant, and cut out the polka dots so they could also be drying. I used different size cookie cutters to achieve the perfect circles. For the bow I cut out two 2″x4″ rectangles out of colored gumpaste, gathered the ends on both sides of one rectangle, and stuck them together. That created one side to the bow.

For the bottom cake I used a 10″ round pan and made two cakes (each with almost two cake batters for a total of almost 4 cakes). I leveled them out with a cake leveler, put buttercream frosting in between the layers, and then covered the cakes in buttercream frosting before placing the fondant over the top and smoothing it out. The baby “bum” was made from a small round pan that I filled extremely full so that it would bubble over creating a round effect.

After the cake had cooled completely, I carved it to make it the shape I wanted. Covered it in buttercream, and then the fondant. For the blanket on top I used the bright green and blue and mixed together but stopped before it started really mixing the fondant colors together which created the swirly effect. Finally, I put wood dowels in the bottom cake and assembled the baby on top, using more dowels on the legs to the feet.

Lastly I placed the blanket on top and lifted spots of it creating the ruffled look and used a little bit of water to “glue” it in place. Hope that all made sense! 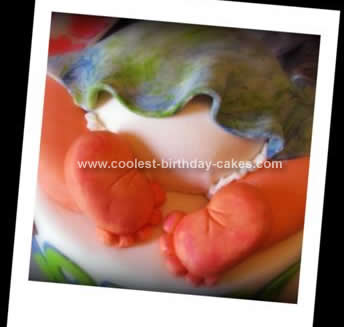 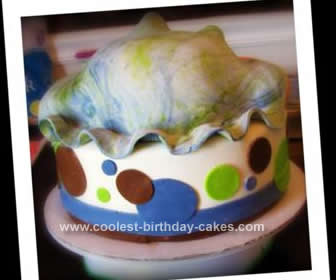 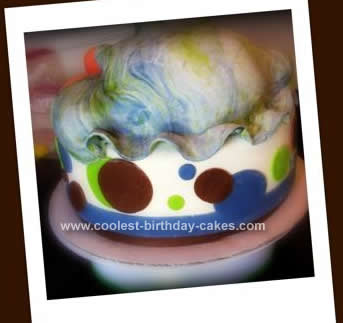