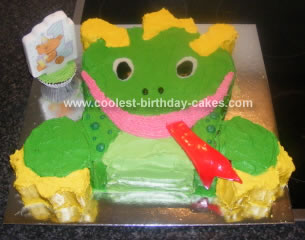 This was my son’s first birthday cake. He loved the baby Einstein Mozart DVD and would laugh when the dragon came on and stuck his tongue out.

The Baby Einstein Dragon Birthday Cake was a plain vanilla cake from a couple of packet mix cakes. I also made up a cupcake to stick his candle in as I didn’t want to put in his cake.

The icing was purchased already made up from my local Coles supermarket. It was Betty Crockers vanilla icing. I used 2 2/1 tubes for the cake (yes, i made the cake a bit big).

Once the cake was cooked and cooled I just cut out the shape of the dragon and then iced the cake with an icing knife as per the picture in one of my sons story books.

His mouth was piped on with a piping bag as it was the only way I could think of to get the icing in the shaped of the inside of this mouth.

For his tongue I used the hard marzipan icing once again purchased from supermarket and just coloured with food colouring and cut to the shape I wanted.

This was my first attempt at a character cake but I would also like to say thanks to my son’s godmother Paula for her help in making his cake.