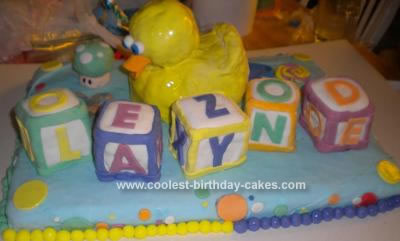 This Baby Shower Block Cake started with about three yellow cake rounds, one yellow 8″x13″, and one devil’s food 8″x13″. This was for a friend of mine, her son’s name is Layne so I spelled his name in the blocks.

I made a batch of Italian buttercream with less butter than it should have, so I just used it as the icing and the filling because it tasted amazing. The blocks were made from two yellow cake rounds, cut into five squares. Each had four layers resembling Petit Fours.

I covered them in fondant, and then cut fondant strips in contrasting colors to make the borders around the edges. I then used cookie cutters for the letters and glued them on with water.

I used the two 8″x13″ cakes as the base; I sat them side by side and rolled blue fondant over the top. I cut out all different colors of fondant in circles and put them all around the cake. The border is rolled up fondant balls glued to the cake with water. I could have done way better on this cake, but I had to do it in one day after I got home from school.