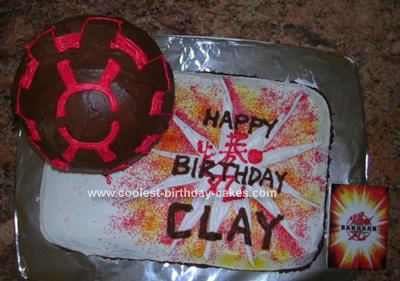 I made this Bakugan Ball Birthday Cake for my son who was into Bakugan, the entire party theme was Bakugan. I used the Wilton Sports Ball pan, half was chocolate, half was vanilla/yellow cake. Used the rest of the cake batter in a 9×13 pan and poured both in, so it was also a mixed cake.

The decorating of the sheets cake was first, made to look like the back of the Bakugan playing card, used some red sprinkles and white spray icing, but the rest was just icing. The ball was put together with icing in the center, iced the bottom half, then ‘dropped’ onto the sheet cake. I should have cut a flat spot on one side of the ball so it would have been set on the cake a little better.

I ended up using ‘cookie sticks’ through the ball to keep it set on the sheet cake. Then iced the top half, detailed like a Bakugan.

All the boys at the party were in awe. My son loved it. 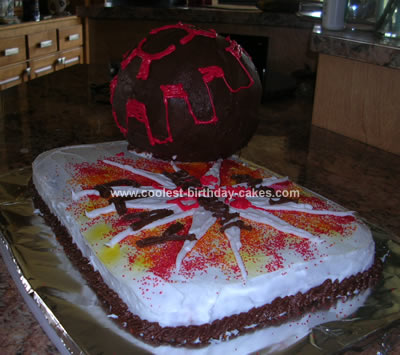