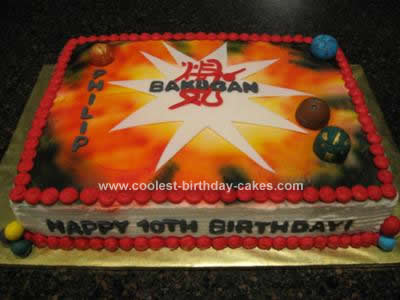 This Bakugan Birthday Cake was an 11×15 sheet cake covered in butter cream; the cake itself is a marble sour cream flavor filled with chocolate ganache. The white star was cut out of fondant, and all lettering was cut from fondant using Wilton mini letter cutters and attached using a bit of water brushed on the back.

The Bakugan symbol was free handed using strips of red fondant. The starburst effect was made using an air brush, alternating yellow, red, and black. I made the Bakugan figures (in closed form) from colored fondant and used a shaping tool to make the lines. The metallic detailing on the Bakugan balls is edible silver and gold glitter powder mixed with vanilla extract and painted on with either a brush or toothpick (for the lines).

This cake was made for my son’s 10th birthday and patterned after the design on a Bakugan “gate card”; my son greatly enjoyed the design and had fun comparing my “Bakugan” to his real ones.