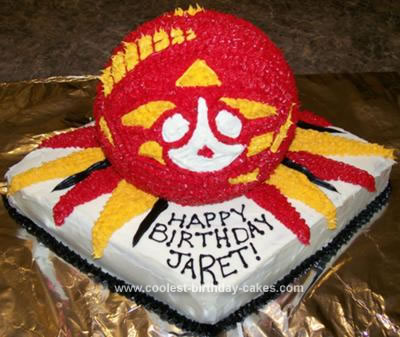 I had never heard of Bakugan, but a family friend requested it so I Googled it and came up with a few ideas. I am not an expert and a lot of them looked really tough. This Bakugan Cake one was fairly easy.

I had 2 cake mixes. The first I cooked in a soccer ball pan (do NOT use the entire mix or it will spill over) and used a chocolate cake recipe. They are baked in 2 bowls and then assembled after. The second in a diamond shaped pan. It was a white cake with skor Chipits I added before I baked it.

For black, I used 1/2 tub chocolate icing and a few goops of Black Wilton gel coloring. Chocolate turns black WAY easier than white icing! I probably needed ¼ of the tub of icing. I then found a few pictures on the internet of the shapes and blew them up and printed them. I traced them onto wax paper and placed it on the ball. I used a toothpick to poke holes and trace the shapes. Before I started Star-icing it, I dropped the ball onto the diamond.

I ended up free handing some of it while icing and decided to put the age on the other side of it. It took me a total of 4 hours to do.