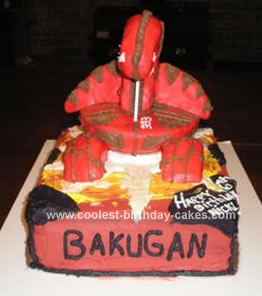 I made this Bakugan cake for my friend’s son’s 6th birthday. When she asked me to make this cake, I had no idea what a Bakugan was! She gave me a Bakugan toy (which is the size of a large bouncing ball) and a Bakugan card as a models to make the cake.

I first made a homemade white cake and homemade buttercream frosting. I baked the cake in a 9×13 cake pan with about 12 cups of batter. I colored some of the buttercream red and frosted the entire cake. My goal was to make the base of the cake look like the Bakugan card.

To my suprise this cake was not difficult to make, and it was actually a lot of fun! My friend’s son loved it and his friends did too!