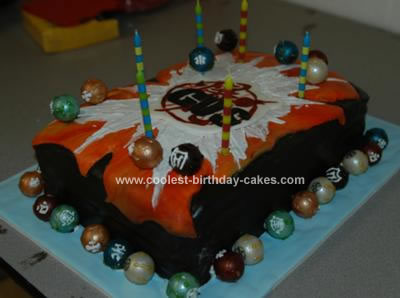 The outside of this Bakugan Card Cake with lots of Bakugan Balls is chocolate marshmallow fondant. The design on top is marbled red/yellow marshmallow fondant, which I think could come out better with more practice. I used white royal icing for the starburst design because the white spray color I ordered online does not work at all. The logo was done ahead of time from white fondant that I hand-painted with slightly “watered down” (with extract) gels.

For the balls I used the truffle idea with pearl dusts that is very well detailed in a different cake write-up on this site; I don’t want to be totally repetitive. However, I used royal icing with #2 for all the white piping on the balls and it worked well. The gels that I used for the other balls are OK, but I don’t like the way they will not harden when they dry. If I were to do this again, I would plan ahead to tint small batches of royal icing to do all the balls instead of using the colored gels. They looked cool, but also the kids were a little afraid to eat them and those that did actually didn’t like the truffles!

Recipe is Colette’s Chocolate Cake with coffee filled with basic chocolate buttercream from the Cake Bible. It is delicious.