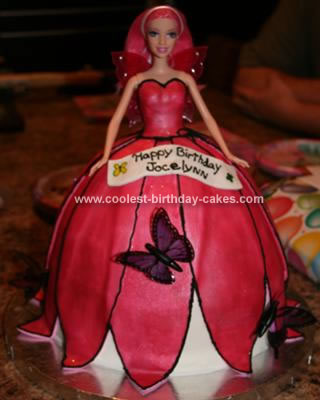 I used the Wilton doll mold for this cake. I then put a crumb layer of homemade buttercream on the cake. I put a base layer of white fondant over the entire cake before I started with the “petals” of the dress. I dyed the fondant a light pink with gel color. I covered Barbie’s legs in plastic wrap and after making a small hole to keep the cake from cracking, I pushed her down into the cake. Then I hand carved each one of the petals and placed them on the skirt of the cake.

I freehand carved the bodice for the Barbie. After I applied all the fondant, I went over all the pink fondant with a pink luster dust to make it sparkle, it did also make the pink darker. Then I piped the black trim around the skirt petals using buttercream. I placed pre-made butterfly picks in the cake skirt for a little extra color.

When I delivered the cake, the little girl thought the cake was under the Barbie cover (she didn’t think that it was edible). That was the biggest compliment I could get! It was worth all the effort! I used my idea for the style of the cake from the dress that this Barbie wears.

Pretty as a Princess Cake for my 4 Year Old Daughter