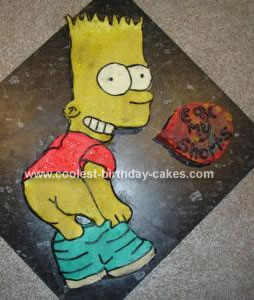 I enlarged and printed out a picture of Bart that we found on the internet for this Bart Simpson Birthday Cake. I then traced it onto baking paper, cut out the picture then placed it onto the pre baked cakes and used toothpicks to keep it in place.

Then I used a sharp knife and cut the cake out around the picture. I then cut out all the bits I wanted to used yellow icing on, leaving all the other pieces on the cake eg the eyes, shorts, teeth, shirt. Then I iced all the yellow bits, pulled of the paper for the eyes and teeth, used white icing, then pulled off the paper for the top and used red icing, then the shorts. All the black bits around the outside of Bart, his shorts, teeth eyes are licorice which I had cut into thin strips.

The speech bubble to side is a bit of left over cake from cutting out Bart which I iced using the left over icing. The wording ‘eat my shorts’ is made out of melted chocolate which I used a icing pipe and wrote out the lettering on baking paper. I did several of each letter and picked out the best ones.

I sprinkled sugar glitter flakes using the same colour to give the glitter effect.