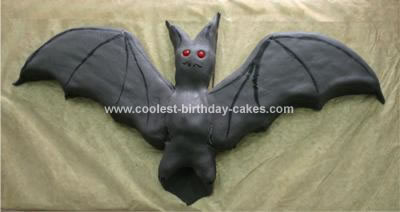 I made this Bat Cake from one 8″ round with no leftover scraps! I cut the wings from the sides of the round with a scalloped shape in the middle, for the underside of the wings, leaving three connected oval-ish shapes in the middle. Two of those ovals became the bat’s body and head. The third was cut in half lengthwise and the pieces laid on their sides, one on top of the bat’s head and the other on its belly; this created a 3D curve to the bat’s body.

Then I cut slivers (long pointy-ended ovals) from the inside top curve of the bat’s wings to shape them, and then cut those slivers in half crossways. Two of the resulting pieces became the bat’s ears, and the other two its legs.

Then (after coating with buttercream, of course) I covered the whole thing with homemade marshmallow fondant. I did the wings first, and then covered the body with a separate piece of fondant, because a piece of rolled fondant large enough to cover the entire cake would have been extremely hard to handle! I liked the effect of having a bit of a “furry” edge between the body and the wings.

The black food coloring I used came out more purplish-grey but we decided that the color was fine. Having it not be totally black allowed me to paint the details on its wings and face with more black food coloring. The eyes are cinnamon red hots candies, inserted in holes poked into the fondant.