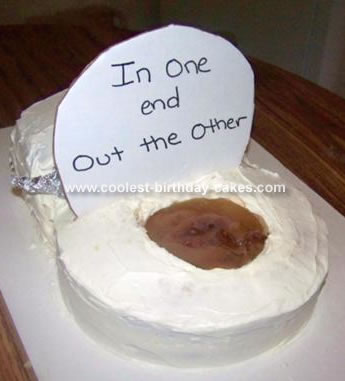 My husband and stepson both have a great sense of humor, so when we were getting together I decided to see if I could get a laugh out of them. I did!

To make this bathroom humor cake I used two 9 inch round and one 9×13 square cake. I cut a hole in the middle of one of the round cakes for the hole of the toilet. Then placed it on top of the other round toilet for the “seat”. Then I cut the square cake into 3rd’s and stacked the pieces on top of each other for the “tank”.

For the ____ (well you know) I used lemon jello, I used a little less water than it called for and then twisted up tootsie rolls in it. The “seat cover” is just a piece of cardboard!

I had a blast making this cake, though I have to admit there were a few times even my stomach turned.