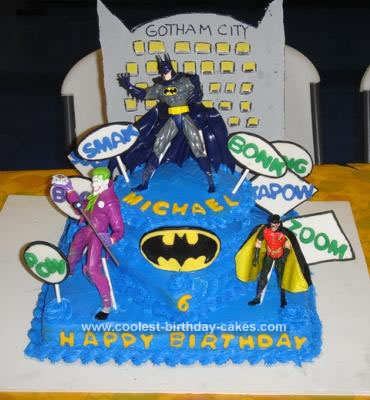 For my grandson’s 6th birthday it was a Batman and Robin to the Rescue Birthday Cake. My daughter and her family don’t like fondant, so most of the cakes I make for them are covered with butter cream as is this one. The first layer of the cake is 14×14 inches with a 9 inch round, second tier is also filled with butter cream.

Since Michael was only six when I made this cake I decided to try and make it like the campy TV show which was on when I was young. This accounts for the POW, ZONK, SMACK, BONK, etc. These signs were made with fondant and letter cutouts. I made the signs and added lollypop sticks to hold them up. The Batman emblem is made out of fondant and is all the lettering on the cake. I propped up the action figures with lollypop sticks.

The backdrop of Gotham City is made of cardboard and yellow construction paper. I cutout the city, painted it gray and cut out the windows so that you could see the yellow lights inside the building. The toughest part of this cake was finding the Joker and Robin action figures which were the ones my grandson specifically wanted on the cake.

His party was held at a gymnastics gym so the kids were all inspired by the cake and played Batman and Robin. A great time was had by all.