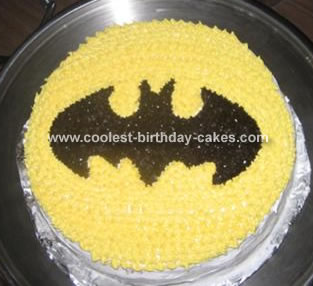 I’ve been making cakes for my son since his first birthday. This year was his 5th and he wanted a Batman cake. I made two round cakes and cut the tops off to get a level surface once cooled. I used chocolate icing as a filling and then used white to cover the entire cake.

I used a Batman logo from the internet to trace out with a toothpick on the cake. I then filled in the logo using a star tip with black icing. After that was finished I used yellow frosting to finish the logo. This was a really easy cake to make.