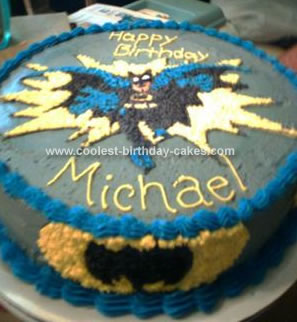 I made this Batman cake for my cousin’s birthday. It was his 11th birthday and he was having a small family party of about 15 people. He recently became a huge fan of the show Batman, The Brave and the Bold. I looked online for images from the show and came across this one.

I baked a chocolate cake and used a Wilton’s 10×3 round pan. I love the Wilton pans, they always bake so evenly if you follow the suggestions they come with (in this case 8 cups of batter at 325 for 80 mins).

Unfortunately for me this image didn’t look too good flipped so I had to do it the two step way.) Once the buttercream on the cake cake stiffened I placed the piping gel image on top of the cake and rubbed it transferring the outline to the cake. Because the image was more complicated I piped the black outline with a round tip 1 before filling it in with a star tip 13 though this got tough towards the end because the outline stiffened and would pull up if the tip touched it.

I finished the cake by adding a shell border and the bat symbol around the sides of the cake (all buttercream). The cake was a huge hit!