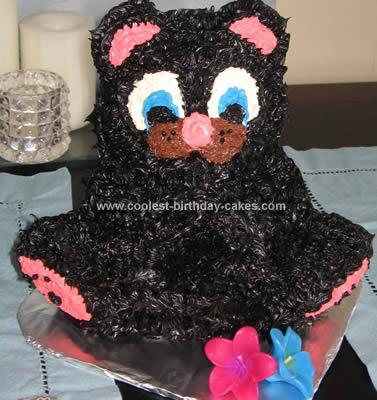 For this bear birthday cake I used the Wilton Stand-Up Cuddly Bear Pan set. I used the regular one.

I followed the directions that came with the pan. I used a regular Pillsbury cake mix (chocolate) as well as a pound cake mix. It took a bit of getting used to but I didn’t have any real difficulties and this was my first time using a pan. I would suggest maybe using a set of pliers to put the clips on the pans before you bake the cake.

To decorate the bear I used tip #16. I was going to use butter cream icing but ended up using plain old generic store bought milk chocolate icing that I tinted black with Wilton icing colors gels. It was cheaper and worked out great. To finish the cake off I placed 2 flower candles at the base of the cake that I purchased at a dollar store.

I’m not going to lie, this cake took me quite a while to decorate. It took me roughly 2 hours to cover him in black! If you’re a more experienced cake decorator I’m sure it won’t take you nearly as long as it took me.