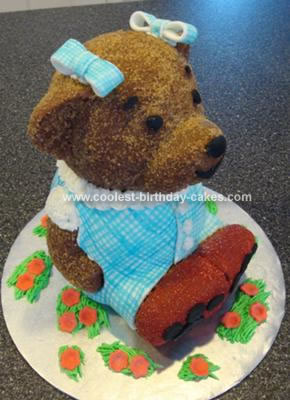 My children’s pre-school was holding a fundraising event with a Wizard of Oz theme. I had recently received the Williams-Sonoma Build-a-Bear cake pan as a gift, along with the Santa decorating kit. Wanting to try my new pan out, I decided to make the bear cake, but modify the decorations to dress her like Dorothy from the Wizard of Oz.

The decorating kit came with directions for making “fur” by painting on a sugaring glaze and sprinkling on turbinado/demerara sugar. The fur was done, per the bear’s decorating instructions, except for the ruby slippers, where I just used red decorating sugar instead. (The fur was harder than I expected because I had to keep picking up the bear to reach different surfaces.)

The kit also came with fondant for the Santa outfit. I made my own MMF (marshmallow fondant) in white and painted on the gingham pattern with tinted clear vanilla. I then used the Santa costume pattern from the kit, minus the sleeves and details, to cut out Dorothy’s dress. I also made my own fondant bows.

I used buttercream frosting to paste on the costume and to add the frilly sleeves and collar for the dress.

There was also a pattern for the foot pads, eyes, eyebrows, nose and mouth in the Santa kit. I used this and the black fondant that came with the kit (so I wouldn’t have to color any fondant black) and pasted them on by scraping off the glaze and “fur,” and painting on fresh, wet glaze to stick on the fondant pieces.