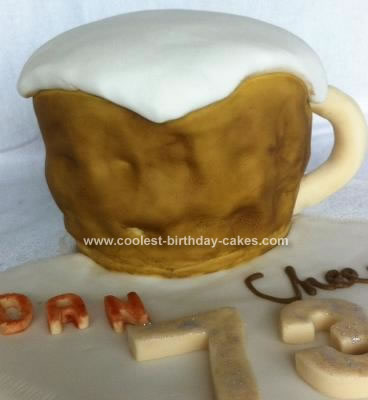 I started this Beer Birthday Cake by baking one cake in a 1pint pudding bowl, and another cake in a 7inch tin.

This is the mixture for the two cakes!

It took the pudding cake a lot longer to bake because it was a deeper cake.

These cakes were then left to cool completely.

Meanwhile I colored some fondant roll out icing in yellow ready to cover the cake. The cake is now chilled so I covered it in the yellow fondant and with my thumb made the indents that you see on the glass. I also made a handle for the glass but I made this with flower paste because this dries hard. These were left to chill for a few hours till hardened slightly.

I then proceeded with some dark brown color paste and a tiny bit of vodka. I made a watered down color, and using a piece of foam, continued to colourwash the whole cake. Make sure you don’t wet the cake too much.

I then rolled out some white fondant for the froth on the beer. I placed this on the top of the cake. Finally I attached the handle with some royal icing I had colored the same color as the cake, supporting it until the icing has hardened.

I then did the lettering on the board. I think if I made this cake again I would do another 2 layers of cake. I felt the glass was not quite tall enough. Not bad for a first attempt though. Dan, who’s birthday it was loved it.