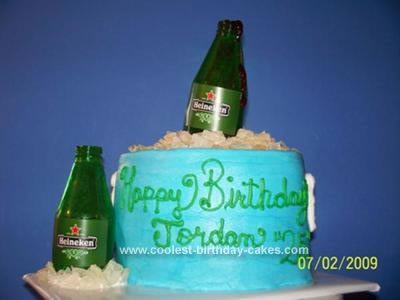 I made 2 small oval cakes for this Beer Cooler Birthday Cake. I used 1 cake mix baked according to directions. Let cool completely. Then ice between layers with buttercream.

I found the directions for making sugar bottles online and thought I would try it. It took longer to make the mould than it was supposed to and I’m blaming that on the high humidity here. It took several days of adding layers of laytex to my original bottle. It’s only supposed to take one day according to the directions I found.

Then I added more blue around the edges and used the Viva towel to blend in. Then in the center I added a mound of white icing. I stuck the bottle at an angle in the icing and added the ‘ice’.

Which was made of sugar and corn syrup cooked in the microwave. Let harden and sprinkle with powdered sugar and break into pieces with a meat tenderizer hammer.

I added a white handle around the back of the cake to look like a mini cooler [glad I chose blue because his wife said he actually carries a small blue cooler].

I added a 2nd bottle beside the cooler and to get it to stay, I put a mound of white icing on the board and stuck the bottle in it. Then I added more ‘ice’. I wrote Happy Birthday Jordan in green tinted buttercream. I also colored a bit of piping gel and put it on the top and side of the bottle to look like spilled beer.

I don’t know if he liked it but his wife sure did!

And I don’t have the edible ink or paper so I just made the labels from a picture on Google. And stuck the label on with corn syrup.