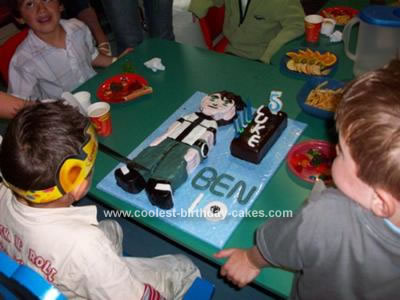 My grandson wanted a Ben 10 cake for his fifth Birthday so I started my research; I found a picture on the internet, printed it out, enlarged it, traced it onto greased proof paper and cut around it.

I made 4″ x 8″ sq chocolate mud cakes, as I found their texture easier for cutting. Two cakes were used for the legs and feet, one for the body and another one for the head. I put the tracing on top and cut around to shape.

I covered the cake with butter icing so the pieces would stick together and this also helped the Royal icing to adhere more easily.

I had quite a bit of cake left over so I combined the pieces and made a separate cake with his name on, and put candles on it. He took the small one home as his birthday was the next day. There wasn’t much left of the cake and everyone said how much they enjoyed it.