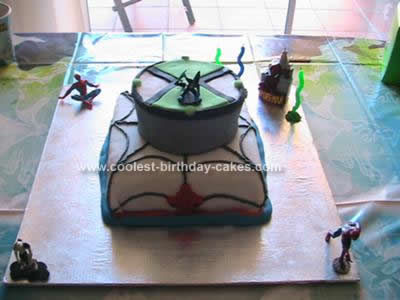 My son was turning 4 and couldn’t choose between a Spiderman or Ben 10 theme. So we decided to combine them. I needed a cake which would combine both so I decided to do a Spiderman layer on the bottom and a Ben 10 omnitrix on top. This could really be adapted to any two superheroes with a little imagination!

The bottom layer is a square sponge cake, covered with plain white plastic icing. I then piped the black spiderweb with black buttercream icing. I bought the Spiderman figures made out of icing at a local baking goods store. I then coloured the plastic icing red and blue and rolled it into a “worm” shape to put around the bottom. This was quite tricky and didn’t come out as thin or uniform as I would have liked. Maybe just piping buttercream stars in the two colours would have worked better.

The top layer (the Omnitrix – Ben’s watch) – I baked a round sponge and covered the sides with grey tinted plastic icing. I traced a picture of the omnitrix onto baking paper and then placed it on the top of a sheet of plastic icing to get the dimensions right. I just pricked a pin through the baking paper all along the lines to give me a line to follow when cutting plastic icing to size. I actually used a pizza cutter to cut the plastic icing and this worked well.

The final touch of the Ben 10 Birthday Cake Design was putting a small figurine of my son’s favorite Ben 10 alien on top of the watch.

This cake was a huge hit and tons of fun to make. 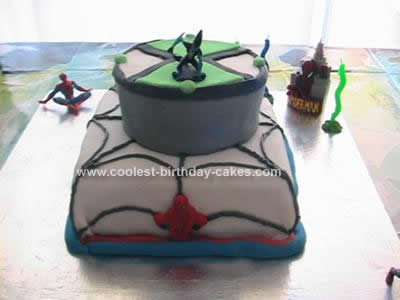