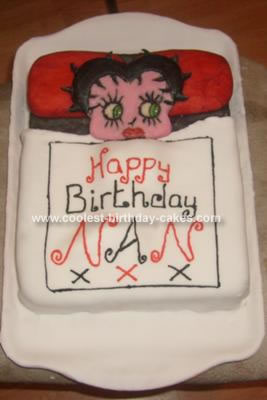 I decided I wanted to make my nan the best birthday cake ever! She adores Betty Boop so that’s what I did, I made a Betty Boop cake of her in bed!

Firstly, I made the cake itself in a roasting tin but it was the perfect size. I did a traditional mix using 16 oz’s of everything and 4 eggs. Mix. I did that twice, put a layer of jam in the middle and laid both on top of each other. I then trimmed the edges to straighten.

I made Betty’s head out of half a packet of marzipan. I shaped and molded then used a knife to scrape design and detail. I then shaped another piece of marzipan to a spike and cut the size I thought was appropriate then dipped in tiny bit of water and placed to the head to make her hair spikes. The water makes it sticky to keep it attached to her head.

I then mixed food colouring to make black using red and blue and did this for any other colours I required and painted the food colouring on to her head. I used silver sugar balls for pupils, and to make her pink for her face I mixed pink food colouring with icing sugar and water to make it runny again as the pink colouring is deep deep pinky purple and I needed it lighter for her face. I got it in the end, took a while but got it eventually haha.

Anyway while that was drying I molded the pillows, also out of marzipan then painted them with red colouring. When cakes were ready to be decorated I put a layer of marzipan over the whole bed then painted with black food colouring. Left to dry a little then placed pillows on to it then Betty’s head on and placed excess sponge from the trim earlier to make a bump as if her body was under the quilt.

Then rolled and shaped fondant icing as a quilt and put over her, lifting her head to look like quilt just under her chin, trimmed, then I wrote on it then placed on to the cake and went round it with black writing icing. I then covered the whole tray around her with icing an that’s that.

Not that hard just fiddly but well worth it! Hope you benefit from me putting this on as I had no ideas from any one else, only me and my husband throwing ideas between ourselves. I hope you like my cake. It was made with so much love for my nan, she absolutely adores it , also this was my first time making a cake like this. I have only ever made traditional Victoria sponge’s before and never tried making one this big either. Most I ever done was a 8″ round one so it is possible for you too.