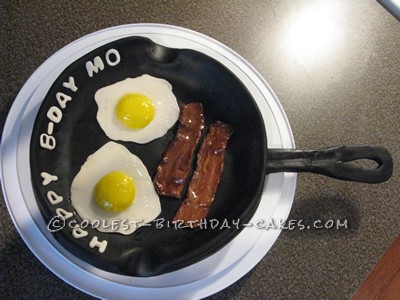 I made this breakie birthday cake for my best friend, who I’ve been friends with for 20 years. She loves breakfast and comes to my house for breakfast almost every Sunday.

I used a  10X2 round cake pan and made a delicious old fashioned sour cream fudge cake (filled with chocolate whipped butter cream  and then carved the middle as low as possible (left about 1.5”-2 ”).  I do not have a good memory for detail, so I looked at several cast iron pans on the internet. Then I carved out the indents on the sides so it looked realistic. I usually make my own marshmallow fondant, but this time I was feeling very lazy and bought the black fondant. Plus, I especially don’t like coloring fondant red or black. Good move- saved me lots of time and grief! It was just a matter of rolling out the fondant, giving the cake a crumb coat and covering the cake with one color of fondant.

Now the handle took a bit more prep and planning. I did it a few days ahead because it needs time to harden. And it’s a good thing because it broke once and I had to ‘glue’ it back with water and let it dry another day. To make it, I added about 3 Tbsp. of tylose (gumtex can be used too) to the fondant and I used a long lollipop stick and molded the handle around that.  Then put a hole in the middle (just looked at pictures to see how I should do that). Then I let it dry a couple of days .

I left about 5 inches of the lollipop stick sticking out so it would serve as the ‘anchor’ in the cake. When it was finally dry and I could put it in the cake, I put it in at an angle (going in from the top of the side towards the bottom) and that worked really well. If it was too long, I would have been able to cut it with pliers and if it poked through, I could easily cover it with bacon or eggs! But luck was on my side and I didn’t have those issues THIS TIME.  Though I must admit, this is not usual….I have cried many-a-tear at midnight when something would not stay on my cake or wrecked it because it poked through.

This cake pretty much turned out the way I planned, although that is not the case every time. But I always learn something. This time I learned that it is really hard to get fondant to look like bacon! Yes, you wouldn’t think that would be the case,  but it was. The eggs were the easy part. For the bacon I mixed some tylose in with the fondant and cut strips, which I just sort of folded and wrinkled to make wavy.  I looked at endless photos of cooked bacon on the internet to see how I wanted it to look and settled on more of a crispy look because my BFF LUVS her bacon crispy.

I colored some of the fondant a pinkish color, mixed it with white fondant and then painted it with edible gel color and vanilla. I used burgundy, pink, Terra Cotta and added dark brown mixed with black on the edges. I kept adding and removing color with vanilla adding whitener, then darkening it until I got so bug-eyed that I didn’t even know if it looked like bacon any longer. So, I walked away for a bit and decided to leave well enough alone (for once!). I remember a similar experience with a piece of fondant garlic sausage and it didn’t end well for either of us. So this time, I decided to apply my lessons from the past.

For the eggs, I simply took white fondant, rolled it flat and cut them how an egg would look-like a sloppy circle. Then I made a deeper circle with yellow fondant and pressed it into the middle for the yolk. I rubbed piping gel to give the eggs that shiny look.

Then I had to figure out how to do the “Happy Birthday message”. Though I considered adding a spatula or something else where I could put the message, I didn’t really want to add another element to the cake, so I just cut white fondant letters out and put them in the frying pan (along the side). I really didn’t know how it would look, but was pleased with the result.

Well, the birthday girl LUV’d the cake!  It was her FB timeline photo for a long time. Each year, everyone waits in anticipation to see what Mo’s birthday cake will be. And my kids (ages 5 and 7) battled over the bacon and eggs, which was actually sort of good because most adults won’t eat the fondant decorations. However, I did have to contend with the sugar rush and crash afterwards (*sigh*).  All in all, it was a fairly quick and easy cake and of course, it was really COOL!