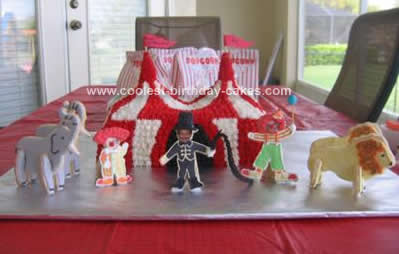 For my son’s 4th birthday, we thought it would be fun to have a Circus/Carnival party theme, so I made a Homemade Big Top Birthday Cake (an adaptation of a cake one of my friend’s had made).

The cake part was fairly easy. I baked three 9 x 13 cakes and stacked them together, icing in between the layers. Then I placed placed 2 ice cream cones (for the tent peaks) where I wanted them, made an imprint of the circle from the bottom of the cones and cut a circular chunk out so the cones would rest snugly in the cake. Next, I began carving the cake to resemble a circus tent. Once the cake was carved, I did a crumb coat over the entire cake.

I used over 3 batches of scratch Wilton Buttercream icing. I used red (no-taste) coloring gel for the red & left the rest white, taking out a small amount to color black for the opening.

I also used some (free-standing) animal cookie cutters and a homemade sugar cookie recipe to make the animals. I also decided to have a little fun and incorporate my 3 children into the cake. My 4 year old was the ringmaster and my daughter & other son were clowns. I had to free-hand their shapes and also took some pictures and cut out their faces to use on the cookies. I made a batch of Wilton Royal icing (with a bit of extra water to make it go on more smoothly) and colored the icing all the different colors I wanted and used decorating bags with #2 & #3 tips. I “glued” their faces on with the icing as well. I placed a twizzler in my son’s hand for his whip (I had a hard time keeping the twizzler from breaking. Shoestring licorice would have worked much better but I couldn’t find any). I used a toothpick & a piece of candy for the clown’s balloon. I had some red fondant left over from another cake and I made the clowns’ noses with it.

I baked 3 small square shapes and also used royal icing to attach them to the backs of each person to help them stand up. They turned out so cute and were a hit. My kids loved being a part of the cake! I considered getting pictures of all my son’s guests to add them in as well, but I didn’t have the time.

The cake took several days to complete but it was worth every minute to see how happy it made everyone, especially the birthday boy! 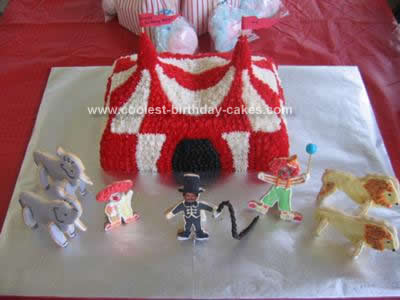 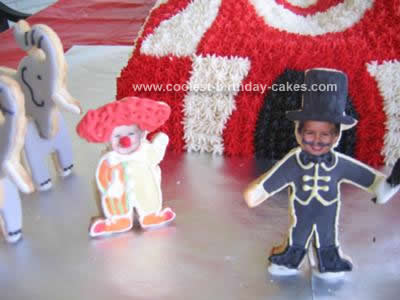 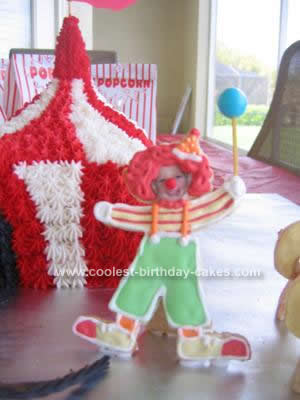 Coolest Clowns on a Drum Cake