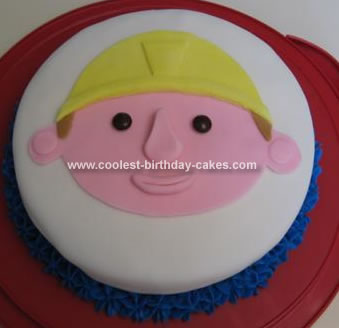 My son loves Bob the Builder so it was a natural choice for his second birthday. I searched for the Wilton cake pan which has been discontinued and found a couple on eBay but with only a few days until his birthday I realized I would have to be more inventive.

I don’t like the taste of fondant but it looks good and is simple to work with so I opted to make this cake. I scanned in a picture of Bob that I thought would work then cropped it and reprinted it on my computer so I had something the correct size to work with. Then I made a 2-layer box mix chocolate cake in 9-inch round pans and layered them together with buttercream.

I covered them both with another crumb layer of buttercream then chilled them in the fridge whilst I rolled out the white fondant to cover the cake. Then I made some fondant pink, yellow and brown with Wilton gel colors and cut up my printed picture to make patterns to cut round to make Bob’s face. I stuck them to the top of the cake with buttercream, molded a 3D nose, lips and mouth out of more pink fondant and used brown M&M’s for eyes.

To finish off this Bob the Builder cake and to hide the bottom edge of the fondant against the cake plate I made the remaining buttercream royal blue to match Bob’s colors and piped rosettes around the base. I have a number 2 candle the same color which we will add on the day!