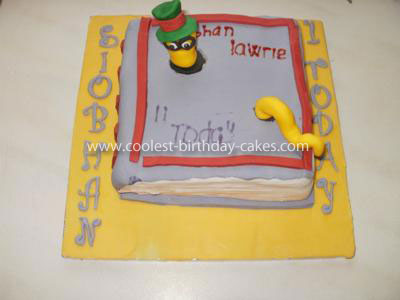 I made this Bookworm Birthday Cake for my daughter’s 11th birthday since she reads a lot. I thought a bookworm cake was very appropriate. I had great fun doing this cake, it took me 3hrs to decorate. To make the sponge I used two quantities of Victoria sponge and baked them in an 8ins deep square tin. I then split the cake horizontally and sandwiched it together with butter cream.

I made 1 1/2 quantities of butter cream. I covered the board with yellow fondant, put a thin layer of butter cream a round the cake then covered three sides with white fondant and ran a knife all round the white to look like book pages then I covered the fourth side and top with a little overhang with lilac fondant icing to look like the cover then i rolled some more lilac icing and put it all round the bottom of the cake to look like the bottom cover , i used red icing on the front of the book and the bind of the book to make it more real looking.

For the worm I used an egg cup as a template to cut out a circle of the lilac and replace it with black icing do this again slightly smaller for where the tail should be. To make the worm I used yellow icing. I shaped it into a tear shape until i was happy with it but as you add all the bits it does look like a worm by the end. I used green for the hat. I made a circle first then I glued the top part on then glued it to the head. I rolled out two small bits of white icing and two bits of black and made the eyes for the glasses. I rolled out the black icing very thinly and made them into circles then glued round the eyes to secure the head in place.

I used a cocktail stick and glue for the tail. I rolled a fat sausage using yellow fondant and just shaped it to look like a worm tail. I found that the glue was enough to hold it in place. My daughter was very pleased with her cake as was I. 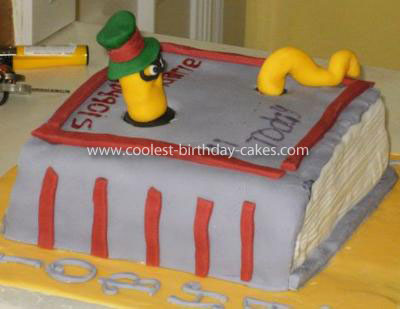