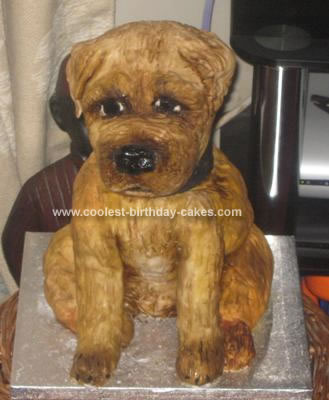 My brother requested a dog cake for his mother-in-laws 60th birthday, she recently got 2 border terrier pups and he thought it would be a nice idea. So he gave me a photo and I copied it and made this Border Terrier Dog Cake.

I made 6 spongecakes and layered with strawberry jam. Then I put them in the freezer overnight. The next day it was time to carve out the body and hind legs. Then I put a crumb coat on, and then a layer of apricot jam. rolled out white royal icing and covered the body. I then used the tip handle of my fork (quite thick and rounded)and started to make lines as if it was fur.

Then for the front legs and head I made up a batch of crispy cakes (packet of marshmallows melted in the micro until fluffy and poured in some ricecrispies). I let this sit for a minute and then I shaped them into a ball for the head and 2 strips for legs.Once I got the required shape I covered in Royal icing and started again with the fork to make the effect of fur.

The head wouldn’t stay on at first, So I got a chopstick and stuck it in the head and down into the body then covered the join in black icing to look like a collar.

I then got out my paintbrush & food paint and used a watery dark brown for the majority of the body and then a thicker dark brown for detail on the face. Black nose and eyes

It turned out so much better than I could have imagined and was the spit of her pup Freddie which was an extra bonus.

It was a definite Bow Wow! For sure.