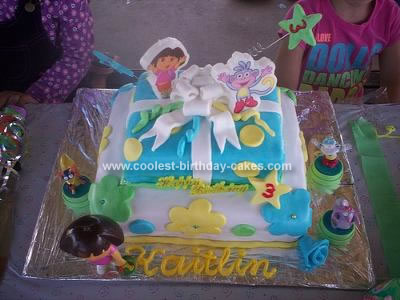 My daughter loves Dora and when she turned three I themed her birthday party Dora the Explorer. I had the idea to make her cake in the form of a box birthday cake, so I decided to make it as a big square and a smaller square.

The cake was made from a chocolate mixture. For the larger cake I covered it with white Royal Icing and for the smaller square I coloured the royal icing blue and covered that on the smaller cake. I used cookie cutters and cut out blue, green and yellow flowers and polka dots.

I made a paste with icing sugar and water and pasted the flowers and dots onto the cake. I cut out a star from the royal icing and iced the number three onto it. For the ribbon I made this by making them in pieces and putting the pieces together and for the streamers I coloured the icing and twisted them.

I found Dora and Boots candles and placed them on the cake. This was the first cake in which I used Royal Icing and I was happy with the results.