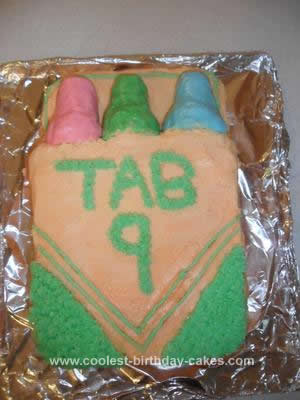 One of my twins is very artistic and wanted a cake that revolved around this concept. Last year, I made a paint palette so this year I went with a box of crayon cake.

The cakes as well as the icing were made from scratch. I doubled a recipe for a white cake and added sprinkles to make it look like a “confetti” cake. I poured the mixture into two 9×13-greased pans. After they cooled, I placed one on the bottom and estimated how much of the top I wanted open (around ¼ of the cake).

I put a layer of icing between the 2 cakes. For crayons, I used ice cream cones and different colored marshmallow fondant. I piped in the name, age, and green corners with a star tip. My daughter was thrilled with the cake and said that it was the best one that I’ve made for her….which is really what is the most important thing to me in the end!