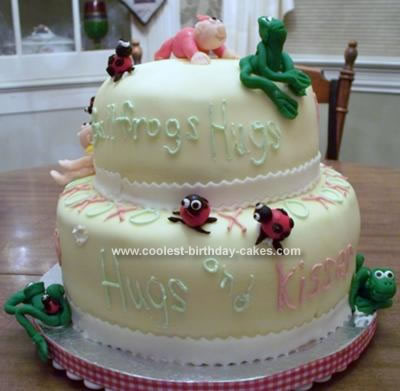 I created this Bullfrogs And Ladybugs Cake for a baby shower for my daughter’s stepsister’s baby shower. She knew the sex of the baby, but wanted to keep it a surprise from everyone else. So we incorporated both her baby girl theme and her baby boy themes in the shower.

The bottom of the cake was created with 2 14 inch layers of vanilla cream cheese pound cake. The filling for this section of the cake was raspberry. The top layer was formed by 2 10 inch round Cream Cheese Chocolate Chip layers filled with Chocolate Granche.

Both layers were covered with a thin layer of vanilla buttercream icing then covered in pale yellow fondant. I tinted white fondant with yellow food coloring.

I needed to incorporate ladybugs and bullfrogs and wanted to have some babies on it. So I used fondant in various colors and sculpted it like I would playdoh. I have to admit that I used Sculpty Clay books for reference. I made a baby out of fondant in a red sleeper that I placed on top of the cake chasing a frog sitting on the edge of the cake.

There is a baby sitting on the bottom in a yellow onesie with a blinkie in her mouth. There is another baby in a bright blue sleeper squeezing a frog between his arms. These were so much fun to do.

The bullfrogs were in various poses around the cake. I created ladybugs out of red fondant with black dots and features and added them to the cakes.

I added wording Ladybug Kisses in pink buttercream icing and Bullfrog Hugs in pale green icing and made XX and OO on the cake.

To complete the day, I make iced sugar cookies in the shapes of ladybugs and bullfrogs as favors. This is probably my favorite cake I’ve made.