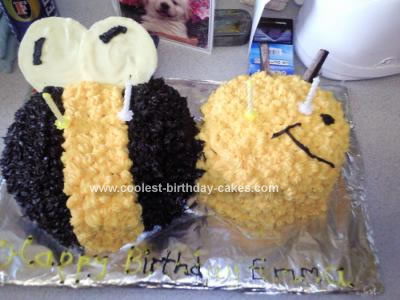 My sister decided to have a bumble bee-themed birthday party and I was set the task of making the cake.

I made two chocolate sponges : one was 6″ round and the other 8″ round. I iced them with chocolate and yellow buttercream icing. I piped the whole of the small cake yellow and, for the large cake, I made a yellow buttercream strip in the middle and then piped the black chocolate icing on either side. I used a black icing pen to draw the mouth and eyes and bought cola laces for the antennae.

I then melted white chocolate and made two large circles for the wings, painting on a shadow with dark chocolate. That was my Bumble bee cake! Every one loved it and it was a great success.