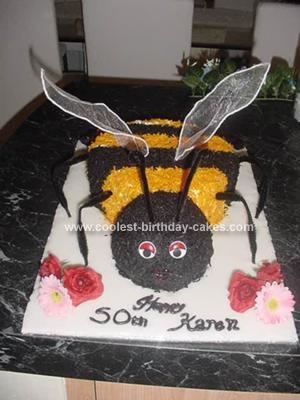 I was asked to make a Bumblebee cake for a friend of my daughter. I made it from scratch from the top of my head,

For the body I used a spring form sandwich tin and cut the front to shape. For the head I used a small Pyrex bowl, both cakes were chocolate mud cakes. I made the tail end piece with a slice I cut off the head so it had a flat side to stick to the body.

For the legs I used bumpy shaped chenille sticks, for the antenna I used two straight chenille sticks and curled the tips. I used two wiggly eyes with eyelids. The mouth I piped on puckered lips with Red Gel, the wings were made by shaping florist wire to the right shape,then I cut the wing pieces out of sparkled organza. The wires were bound with floral tape used especially for cake flowers, then the wings were hand sewn to the wire frames with silver thread.

I covered the remainder of the board with white icing and added some flowers for a finishing touch.