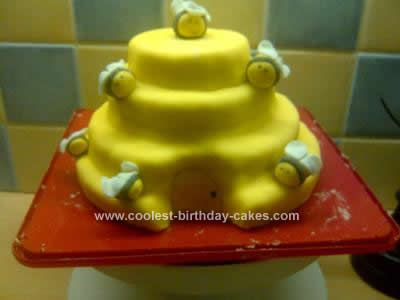 A friend of mine had given me a book of cakes to borrow to have a browse through. I’d had it for a few days when my little girl took a look through and decided she wanted me to help her bake a cake for a friends of hers who had just celebrated a birthday.

So yesterday (Saturday) we both stood in the kitchen deciding which one to bake. She loved the look of the beehive, so we got started on this Bumble Bees and Hive Birthday Cake!

My daughter who is 10 has only ever helped ice cupcakes before and has never made one from scratch, but did most of this herself with a bit of guidance from me. We took two 8” round tins, prepared them with butter and greaseproof paper and put them to one side for later.

We then made up a basic sponge mix using 4oz of self raising flour, softened unsalted butter and caster sugar, two large eggs, single cream and vanilla extract. We sifted the flour onto the weighing scales to weigh the 4oz as I have found this lessens the flour taste once baked.

My daughter creamed the sugar and butter together until it was well mixed and fluffy, then she added half the flour, an egg, a teaspoon of vanilla extract and a tablespoon of single cream (or half & half if you’re in the USA).

She mixed this in, she then added the rest of the ingredients. Once this was mixed in, she scraped the excess mixture from around the sides of the bowl (there was a lot! Lol!), and then mixed it thoroughly for about a minute and a half.

This made one lot of cake batter, and she decanted it into one of the prepared tins. I made the other half of the cake batter for the other tin or else we would have been there until midnight!

I got her to preheat the oven to about 160, and then put the cake tins in the center of the oven and baked for 30 minutes.

Once baked and cooled, I sliced the cakes in half along the middle; this meant we had four 8” round pieces of cake. Then I made each slice about 2” smaller than the last in diameter by cutting around the edges.

We made vanilla butter cream icing (4oz butter, 8oz icing/confectioners sugar, tsp vanilla extract and tbsp milk), and she iced the cake so the smaller pieces sat on top of each other in a pyramid shape, then iced all around the edges too.

I colored some fondant icing yellow and rolled it out thin, then placed over the top of the cake and smoothed it all over and tucking the remainder underneath the base of the cake.

We made the bumble bees by rolling some leftover yellow fondant icing into balls, added some strips of black fondant icing and white petal shapes completed them for their wings. I had an edible ink pen in black and my daughter drew on their eyes. We forgot to save some black fondant for the door, so she drew that on too. All the fondant icing and the bees to the hive are stuck on with cooled, boiled water applied with a small dedicated artist brush.

We will put it onto a cake board when I buy one tomorrow.

We had such fun! We made a lot of mess and it took longer than it would when I usually make a cake, but this is something she made (almost) by herself for a friend’s birthday, and I think she did really well!