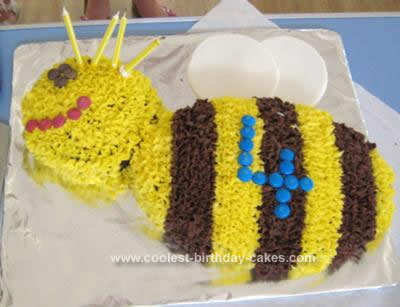 I made this Bumblebee Birthday Cake for my son’s 4th birthday. For some reason he had insisted on a bumblebee cake with a blue 4 on it! Both the head and the body of the cake were a standard chocolate cake mix.

I used an oval shaped casserole dish to bake the body of the cake and then a 7″ round cake tin for the head. I then cut a smaller circle out of the round cake as the 7″ was too big in comparison with the body. I did a trial run using the casserole dish so that I could make sure I didnt under or overcook the cake (I ended up adjusting the cooking times and temperature).

I decorated the cake with a yellow buttercream frosting and chocolate buttercream frosting using a number 5 tip. I wanted to make the bee look ‘fuzzy’. I then used M&M’s for the 4, eyes and mouth and the candles were for the antenna. I had wanted to place 2 royal icing circles in for wings but by the time I had got the cake to the party the icing had softened and they wouldnt have stood up so I had to place them flat on the tray. Something for me to think about next time!