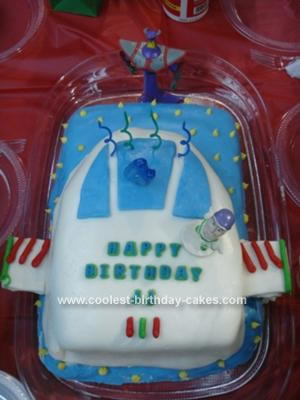 My son loves Buzz and wanted a cake that looks like Buzz Lightyear’s Spaceship Cake. I used ideas from this website and others as well! The cake is two vanilla layer cakes with buttercream icing and then covered in marshmallow fondant (there are a number of easy and good recipes for this online).

I had never used fondant before but it was fairly easy. The letters were just candy ones I picked up in the grocery store baking aisle. I piped on some of the extra decorations (stripes, stars) with colored buttercream. The small wings are made out of graham crackers I pushed into the cake (covered with the fondant).

I got a bunch of Toy Story figures on eBay and after giving them to my son the morning of his birthday, stole a few to decorate the cake!