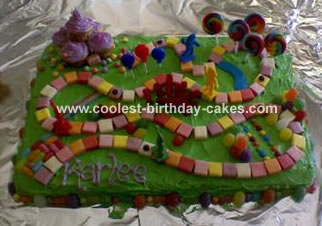 I saw this Candyland cake in a magazine a week after my daughter’s 2nd birthday. I was so bummed, but determined to make it for her third. With a little convincing, and playing the game a lot, she helped me out. It was so much fun. And now a picture of her with her cake are my desktop on my work computer (I had to show it off right?)

I baked a half sheet cake using 2 boxed cake mixes and tinted 1 1/2 tubs of white frosting with Wilton “leaf” green. (I was gonna make it from scratch but then I decided to be easy on myself) I used a little of the cake mix to make 8 mini cupcakes for the castle. (extra just in case) the remaining half tub of frosting I tinted lavender because that’s what princess wanted.

After frosting the sheet cake green it really only took 10-15 minutes to put the whole thing together. I traced a path with a toothpick and then princess helped me place starburst candies in alternating colors. then we used various candies and put them here and there. I made the castle using 4 mini cupcakes set next to each other with one on top. They all had purple piped frosting spires, dusted with pink sugar.

For the life of me I could not find flat lollipops anywhere and was just short of going to a local restaurant that gives them to kids when I found the mini swirly ones at the party supply store in the open stock candy. I was so excited.

It was a little sad to cut into, but since it was so easy I was alright. My daughter loved it so much. She now thinks everyone should have a Candyland birthday!