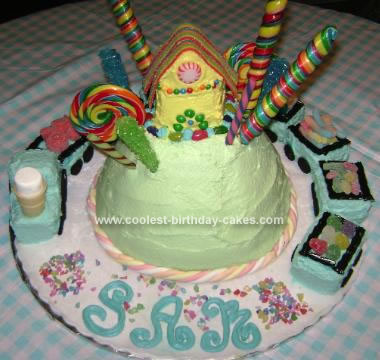 For my son’s 2nd birthday I decided to go with a Candyland cake with a choo-choo train theme. For the “hill” I used 2 layers of white cake mix and made according to “The Cake Doctor”.

After refrigeration, I stacked and shaped them into a hill. I then slathered on the green tinted buttercream frosting (between layers as well), recipes from Wilton. I made the “house” out of the same cake recipe though I baked those in mini loaf pans then shaped accordingly.

I purchased all the candy decor from a local candy store. I used a thicker version of the same buttercream to “glue” the bits on the house.

For the train, the same cake recipe was used but made in mini loaf pans and leveled/shaped. The same buttercream frosting recipe was used and tinted blue (Wilton tint gels).

Bite-sized Oreo cookies were used for the “wheels”. Marshmallow inside a miniature cone was used for front engine smoke. And anything from licorice to other hard candies were used in the “carts”.

This was only my 2nd cake to decorate! It was so much fun! Oh! I made a separate front part of train and put a candle in it for my son to blow out!