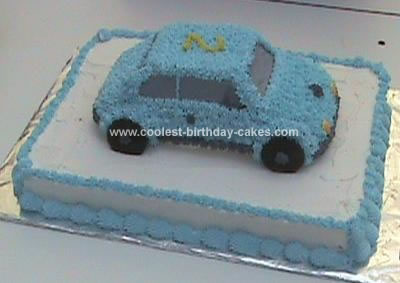 This was a two year old’s car birthday cake. They were having quite a few people at the party, so I wanted it to look good and be big enough to serve all of the guests.

I made just the car part a week before the party, and it was a big hit with the birthday boy! He referred to it as “cake car.” This one was made by first making the 11″ by 15″ layer cake, which was frosted and trimmed in white buttercream.

The actual car was made from a car-shaped pan, and it was fairly easy to decorate, mostly with buttercream stars. The windshields were spread with thinner buttercream. When I realized that the cake didn’t fill the pan enough to show clearly defined (round) wheels, I was concerned. But then thought of using chocolate sandwich cookies. They made it very easy to get the desired effect.

I used flat, over sized cake decorations for the headlights and taillights. Overall it was quite easy.