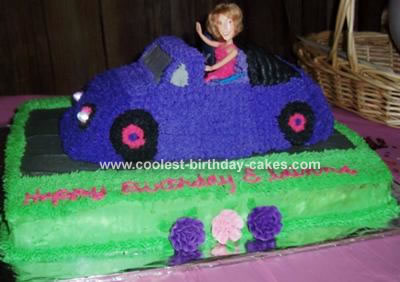 Since my granddaughter was so excited about turning 16 and old enough to get her driver’s permit I decided to make her a car cake. I used the Wilton 3-D cruiser cake pan to make the cake in. I cut the top of the cake off to turn it into a convertible and hollowed a piece out to put her legs in.

I made a 12×15 sheet cake for the base. I colored some butter cream frosting charcoal for the road and used a grass/hair tip to add grass to the sides of the road. I placed the car on the road and frosted all the parts that needed a smooth icing and then covered the rest of the car using a star tip.

I enlarged a picture of my granddaughter until the face was the same size as the face on a small doll pick that I bought. I then cut the face out of the picture and glued it onto the doll pick’s face. Then I placed the doll pick in the driver’s seat.I dressed the doll using a star tip and created legs from frosting that went from the doll pick down into the piece I had hollowed out in the car. You can’t see them in these pictures but I took pictures of 2 shopping bags from places that my granddaughter loves to shop then loaded them onto my computer, sized them down and made mini shopping bags from them to put on the car seat beside her.

I made a license plate on the back of the car using my granddaughter’s 3 initials and the number 16. The finishing touch was adding 2 little battery operated party lights for headlights that I saved until party time before pushing them into the cake so the lights wouldn’t burn out before the party.

The cake was a big hit. My granddaughter loved it. She said she had to laugh every time she looked at it because of seeing herself in it. I made this car cake in purple and then a month later made the same cake for another 16 year old granddaughter in red. 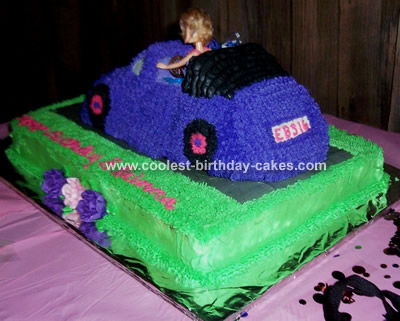