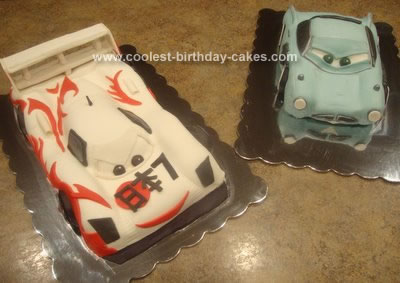 For my twin boys’ fifth birthday, they each requested a car cake from Cars 2. One wanted Shu Todoroki and the other, Finn McMissile. It was a big undertaking as these were the first cars that I’ve tried.

I started baking and making fondant (homemade MMF) the week prior to their party. I baked three 13×9 cakes, a 9″ round, and two ramekins from scratch. I found it really helpful to bake the cakes in advance and freeze them which also made it easier to sculpt them. I also made two batches of MMF, one white and one the blue/gray color of Finn. Then I colored the white fondant accordingly for all of the small details on both cars. I did use silver luster dust for the first time too and found it great to work with. I used it to paint on the silver details on the wheels, windows, and other details on both cars.

I found the tires to be the hardest part of the cars. I made the Shu cake with fondant covered cake tires that I baked in ramekins, but they were hard to manipulate to fit into the wheel openings of cake on the car. The second cake, Finn, I used tires made completely of black fondant.

The only other edible I used other than cake, fondant, and frosting, was the graham crackers that I used for the spoiler on the back of Shu. I covered graham crackers with white fondant, and then supported it with rolled fondant and toothpicks to make sure it stayed where it should.

I made all the frosting and assembled and finished both cakes the day and into the evening before the party. My boys LOVED their finished cakes and so did our family at the party. The Shu Todoroki cake was chocolate with chocolate frosting, and the Finn McMissile cake had a chocolate bottom layer and a buttermilk yellow cake layer with fluffy vanilla frosting tinted blue so it would be blue in between the layers inside.

Everybody said they were delicious! It’s so fun to see the happy faces; makes all that work worthwhile!