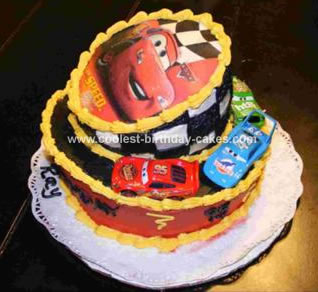 This Cars Mad Hatter Cake was the most interesting cake to make! For my son’s second birthday I decided I wanted to try my hand at one of the mad hatter cakes. It was easier than I thought it would be for those who don’t have a lot of cake experience.

This next part is the big trick. You take the widest layer and cut it in half in a slant so that you like like you have two triangles, you then stack that layer back together with the thickest parts together and the thinnest parts together so that it looks Topsy turvy. Then you stack each layer back together with the smallest layer on bottom and the widest layer on top. Now it should look like a mad hatter hat.

If these directions are confusing, you can Google “how to make a topsy turvy cake” and you will get lots of results with detailed instructions and pictures. I bought an edible McQueen image from eBay and placed it on the 8 inch cake and then decorated the rest of the cake in Cars theme with racing checkers and lightning bolts. I then bought a package of three of the Cars which included McQueen, the King, and Chick Hicks and positioned them around the cake like they were going up a race track.