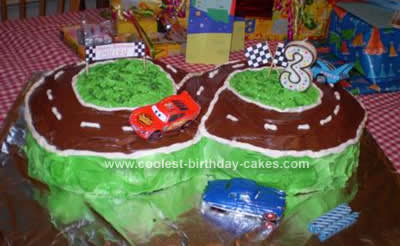 This Cars Racetrack Birthday Cake was one of the first homemade ‘cool’ cakes I tried to make for my son’s 3rd birthday. He was OBSESSED with Cars and wanted everything Lightening McQueen at the time. I knew I wanted to do something with the racetrack, so I merged a couple of ideas and pictures I saw on this website.

I frosted the sides green for grass, did a chocolate frosting track (spatula painted a figure 8 on the top), and then went in with white frosting for some quick piped lines in the road (used a fine point tip). I used a star tip and more of the green frosting for the grassy centers, shook some green sprinkles in said grass zone for texture, and then lined the inner circles/roads with the same white piping too. I made little checkered flags and a racing banner with a fine point sharpee and white cardstock, which I taped to toothpicks to stick in the cake for added fun.

My son picked out 3 of his favorite cars to put on it (McQueen, Doc Hudson, and Mr. The King). Lastly we added a #3 candle and were good to go!

Definitely something simple compared to some of the other fantastic Cars cakes on here, but it was still a huge hit.