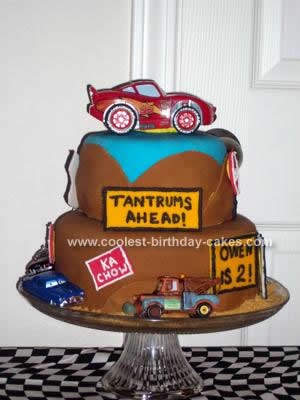 This Cars Road Birthday Cake was made for my son’s 2nd birthday. About a week before his birthday, he became obsessed with Cars! The bottom tier is made of yellow cake. I used 1 1/2 recipes to make three big layers. It’s filled with buttercream and covered with fondant.

I made the signs first. Days before I started baking, I cut out several road sign shapes and laid them out to dry. I had several spares since I’m not very good at lettering or piping.

The top tier of the cake is Rice Krispies treats. I shaped the treats with a 6 inch round pan. The layers are filled with buttercream and the whole tier is covered in fondant. I rolled out brown fondant and cut it in hill shapes and wrapped it around the top tier. That created an open road look, but it also hid the bunched and torn fondant at the bottom.

Making the top tier from RK treats is a great cheat. It’s lighter than cake and it’s nice and stiff. Very little structural support is needed. Kids love it too!

My husband piped all the signs with royal icing. He is an engineer and has a steady hand. He did a great job! I just glued the signs to the cake with buttercream and piped the signposts. To finish, Lightning McQueen was glued on top with buttercream. The smaller toys were just placed on the plate. I sprinkled graham cracker crumbs to hide the bottom of the fondant and make it look like the desert.

The kids at the party devour red this cake. You never see cakes from big box stores disappear that fast.