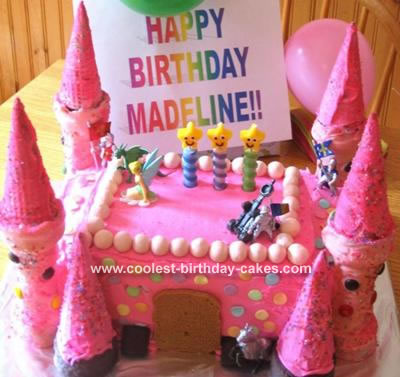 After seeing a small castle cake in an old Betty Crocker kids cookbook, my daughter asked for a “pink castle cake” for her 3rd birthday. I used this site for ideas, the BC kids cookbook and a kids picture book with a castle as inspiration.

She’s not yet into princesses, so I looked for non-princess decorations. The knights, dragon, catapult and horse are from Michael’s craft store (Knights and Dragons Toob of collectibles). Fairies are a hit with Madeline though, so I also got some Tinkerbell figurines and let her add one to the cake.

I made the four high tower turrets, using two cake cones attached end to end with a little melted white chocolate, let that cool and set, then rolled them all in more white chocolate in a pie plate while spooning the chocolate up over the cones. I then melted pink Wilton candy melts and coated a second time. Then I rolled four sugar cones in the pink melted coating, including the base of the upside-down cone, and that stuck the sugar cone to the tops of each of the cake cone towers. I tossed multi-colored sugar at the towers, added M&Ms and sprinkled more sugar on the tops, then sprayed the tops of the turrets with Wilton color spray (pink). I did these a few days ahead and stored them in Tupperware until the morning of the party.

I assembled the cake on a large wooden cutting board covered in foil. I baked two Funfetti 9×13 cakes, and one 9×9 chocolate cake, stacked the 9×13 cakes with strawberry filling between, cut the four corners with a biscuit cutter to make recesses for the towers, and frosted the whole thing with butter cream frosting tinted with Wilton paste color in Rose. I added the chocolate layer toward the front of the cake, to get enough height for the drawbridge, and frosted that, then added the turret towers, and a purchased Windmill cookie for the drawbridge door. I put two “guard towers” with turrets in the front, and just frosted the sugar cones, sprayed with the pink color spray, sprinkled with colored sugar, and attached to Ding Dongs with more frosting. I added some Dove chocolates for contrast, lined the top with Strawberry Milkshake (light pink) Whoppers, and put Wilton pastel rainbow sprinkles on the front of the cake and sprinkled them over the rest of the cake.

I decided not to make flags since the knights all had flags, and so I finished off the decorations with the Knights & Dragons figurines, Tink and candles. It was a huge hit, and much better than any of the purchased castle cakes I’ve seen.