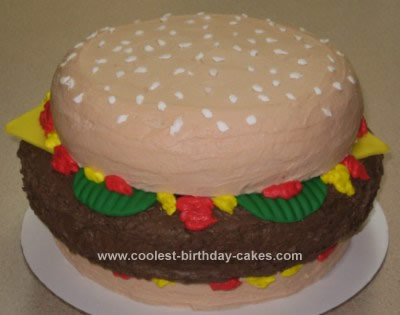 This is how I made the Cheeseburger Birthday Cake Design. The buns are 2 – 8 inch cakes, covered with buttercream. The top cake was trimmed just a bit on the top edge to make the bun shape. The hamburger was a 9 inch cake covered in chocolate buttercream. While the frosting was fresh I used the spatula to tap the frosting which made spikes. I put it in the fridge for about 20 minutes for the frosting to firm up, then used a piece of paper towel to slightly press on the sides so that the spikes were pushed in to make lumps like hamburger.

The cheese slices and pickles were colored fondant from Wilton. As we don’t like the firmness of the fondant in our cakes, they were just slid in the seams between the cake layers. The sesame seeds on the top were buttercream in a tiny parchment paper cone with a small hole cut at the end. I let the frosting dry for a few minutes then with a touch of powdered sugar on my finger, I gently tapped each seed to flatten them. You can do one or two then pat more powdered sugar on your finger.